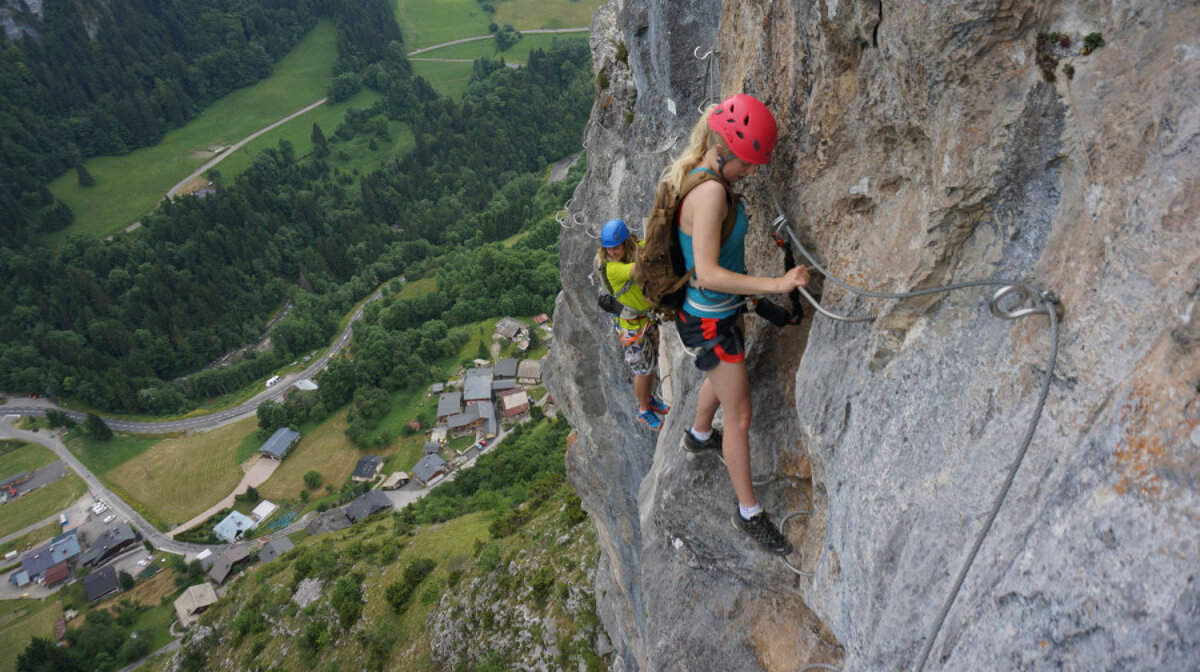 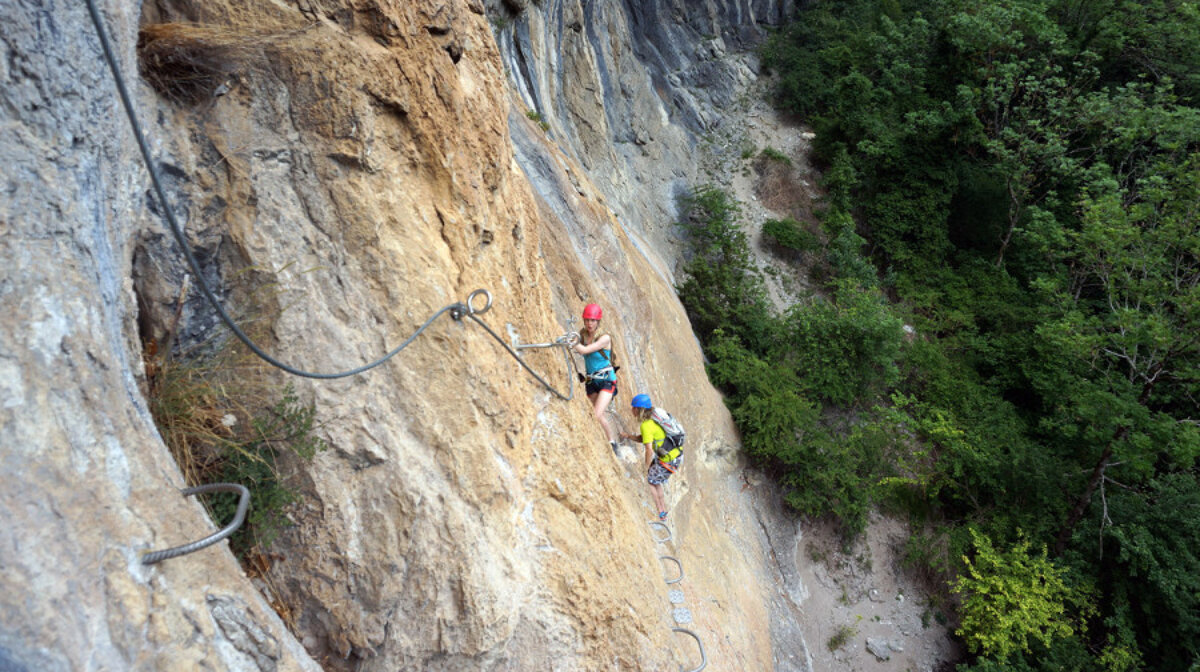 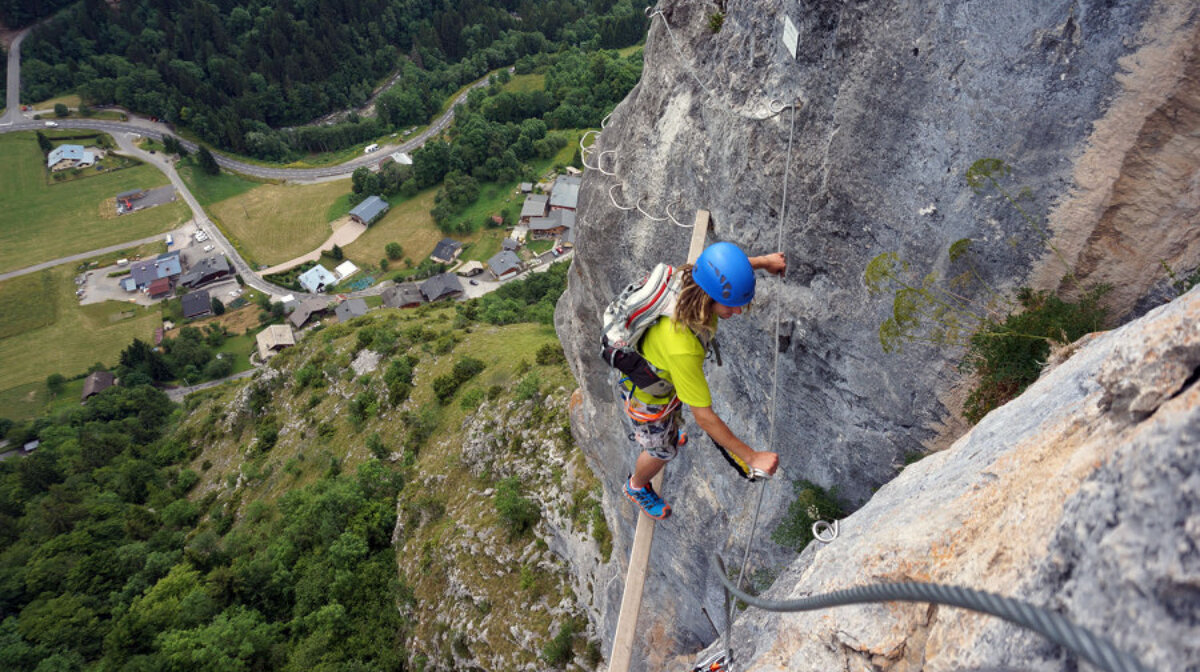 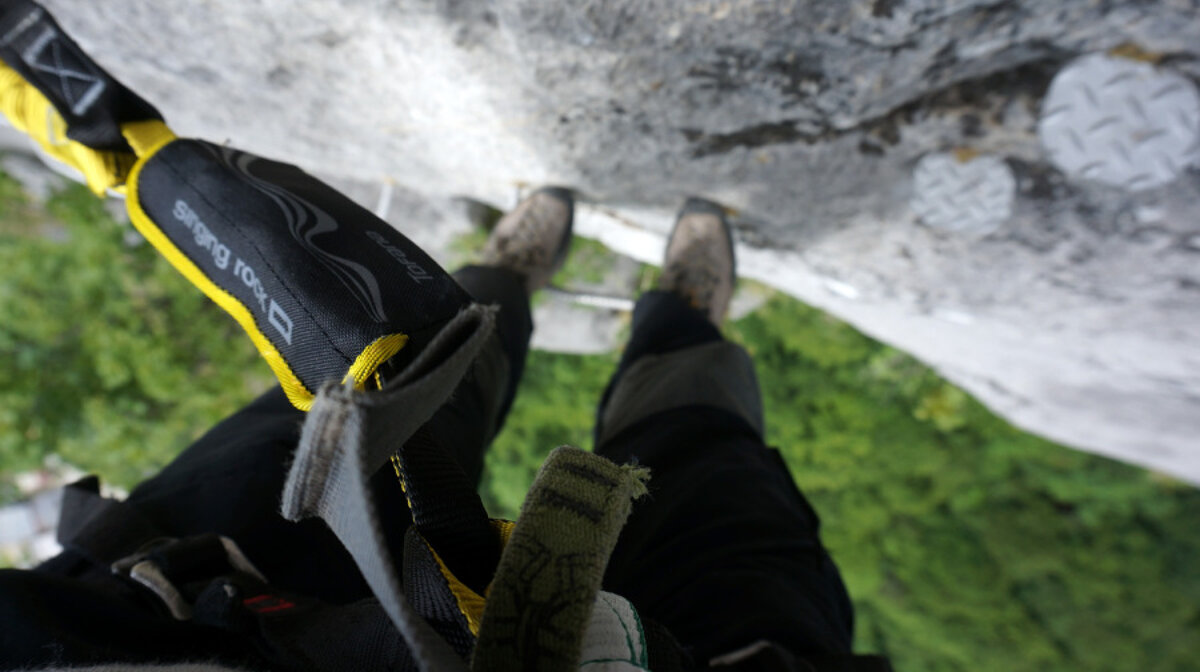 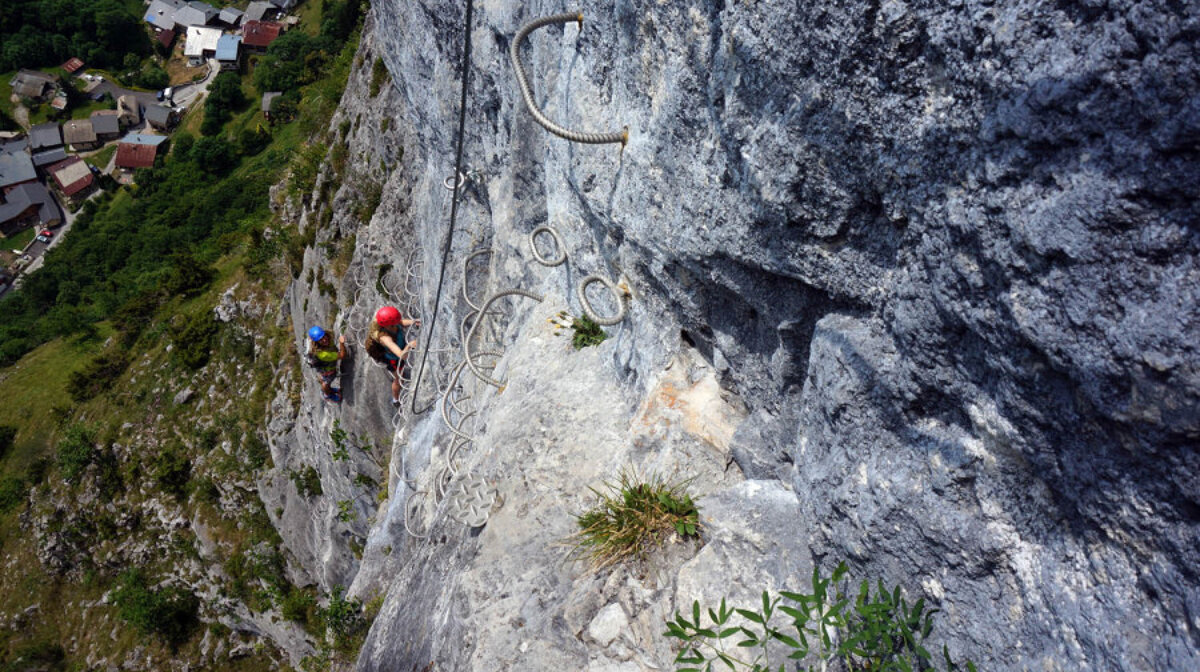 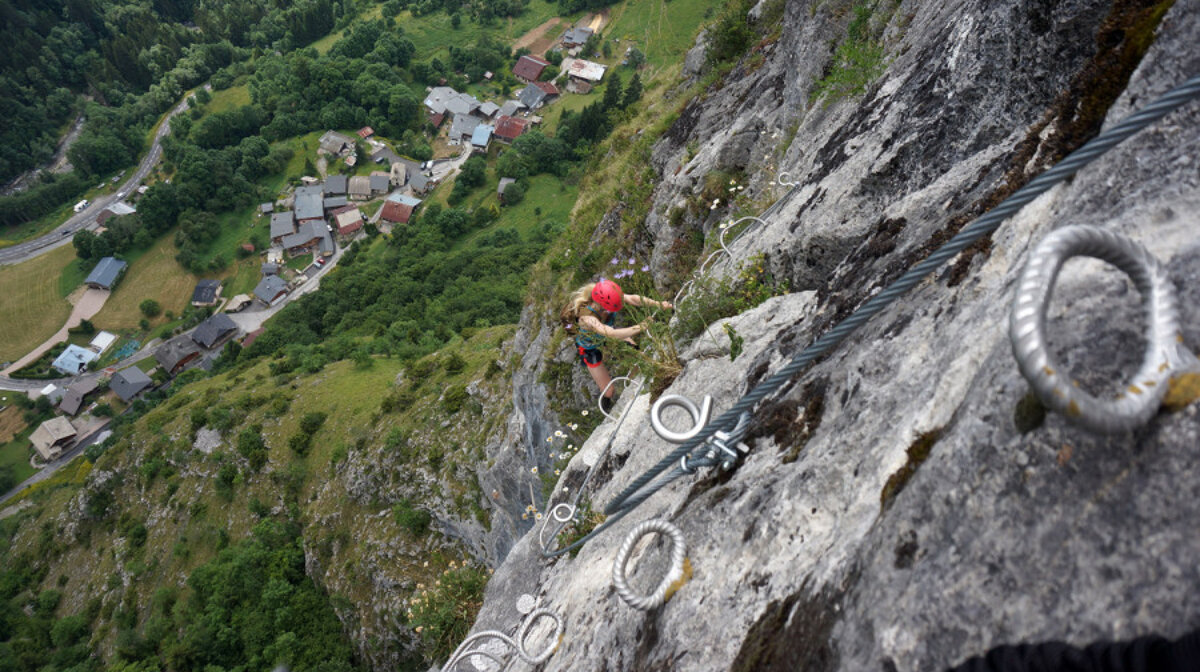 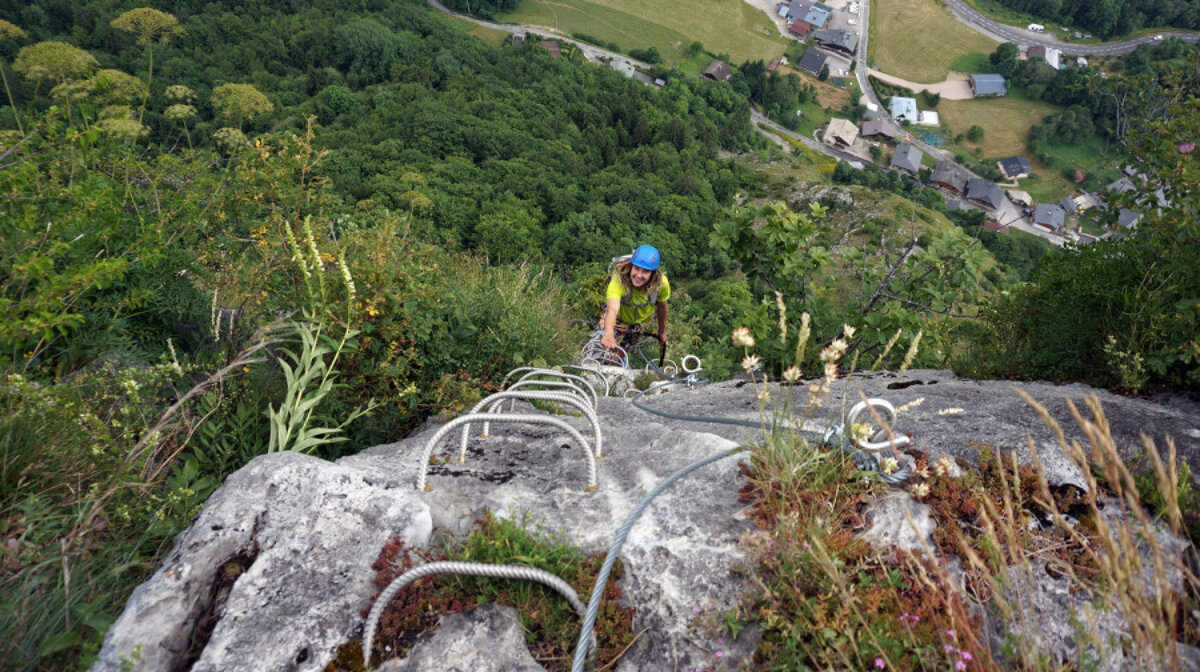 The tiny plank with a wire to hold onto

It's quite a way up!

I dare not look down. As I edge across a 10 centimetre wide plank of wood 100 feet above the ground, with only a cable to hang onto, I’m wondering what on earth I’ve got myself into...

At last I reach the end, I step off the plank and onto an equally precarious perch - a metal rung drilled into the rock. There’s one for my hands, I cling on tightly, and one for my feet. They go on and on up above my head.

I’m at the Via Ferrata on Le Rocher de la Chaux in St Jean d’Aulps. There’s a whole load of sport climbing routes further round the other side of this colossal crag, nicknamed “Elephants End”. Two friends and I have chosen to climb the easier of two via ferrata routes, which ascends a dizzying 795 metres vertical up “La Tete de l’Elephant”.

Don’t be fooled by “easier”, there are some particularly hairy sections on this route with a technical grade of three and an exposure grade of five (the highest). Small ledges and a couple of clinging trees provide a little comfort as you climb the ladder of metal rungs and edge along small metal foot holds, traversing high above the forest below with magnificent views stretching beyond St Jean towards Morzine, with Mont Blanc looming in the distance.

High up above the ground, on this seemingly infinite ladder, makes for a pretty thrilling couple of hours, even if, by the time we reached the top my hands were aching from gripping so ferociously to the metal rungs.

We caught the via ferrata on a quiet day during the week. There had been some thunderstorms earlier that morning but we managed to catch a dry window – I would not recommend trying this in a storm! There is always something to hold onto and there are no overhanging sections on the “easy” route. The difficult via ferrata, “La Oeil de l’Elephant”, runs up the rock only a few metres to the right but there are escape routes onto the easy one if you find you’ve bitten off more than you can chew.

If you want to give via ferrata a try, you’ll need a climbing harness, a helmet, via ferrata gear and an extra sling and carabiner in case you want to clip on, feel extra secure and have a rest. The gear allows you to clip onto the cables that run the length of the route and there is a shock absorbing system to break a fall.

The climb is less physically demanding than it is mentally but you’ll be up on the rock for one and a half to two hours, and the walk in and back out is along relatively steep path - allow an extra half an hour on each side of the climb.

You can access the crag from St Jean d’Aulps, take the Route de l’Abbaye for 200 metres to the car park, walk along the road for around 100 metres and you will find a discreet, overgrown path disappearing into the woods on the right. This path will lead you to the foot of the crag from where you follow the orange waymarks.

There are a few companies in Morzine that will kit you out and take you up to the Via Ferrata with a group, however if you have some climbing experience it’s very accessible to have a shot by yourself. You can buy the equipment at Intersport, on Rue de Bourg in Morzine, or if you are travelling via Thonon, Au Vieux Campeur is a brilliant outdoor shop in town that will help you out with everything you need.

There are several via ferrata routes between Geneva and Chamonix that are very accessible from Morzine. Check out the Cicerone Guide by Richard Miller, “Via Ferratas of The French Alps”, for more information.

[If via ferrata's not your cup of tea, take a look at some of the other summer activities you can do in & around Morzine).