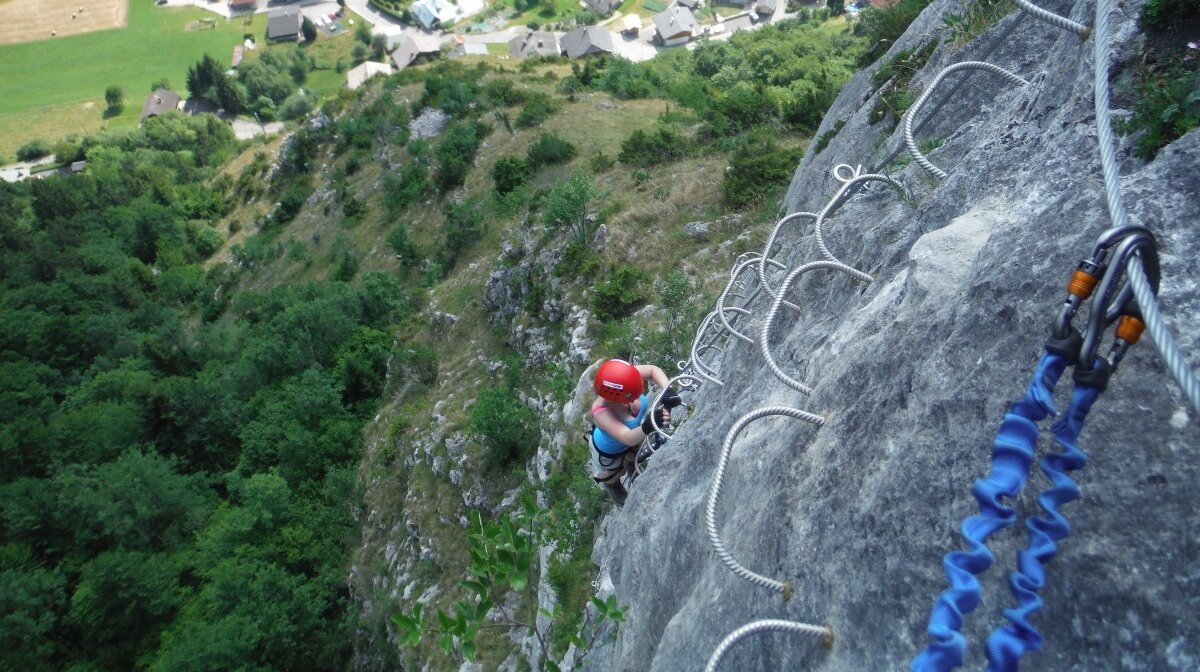 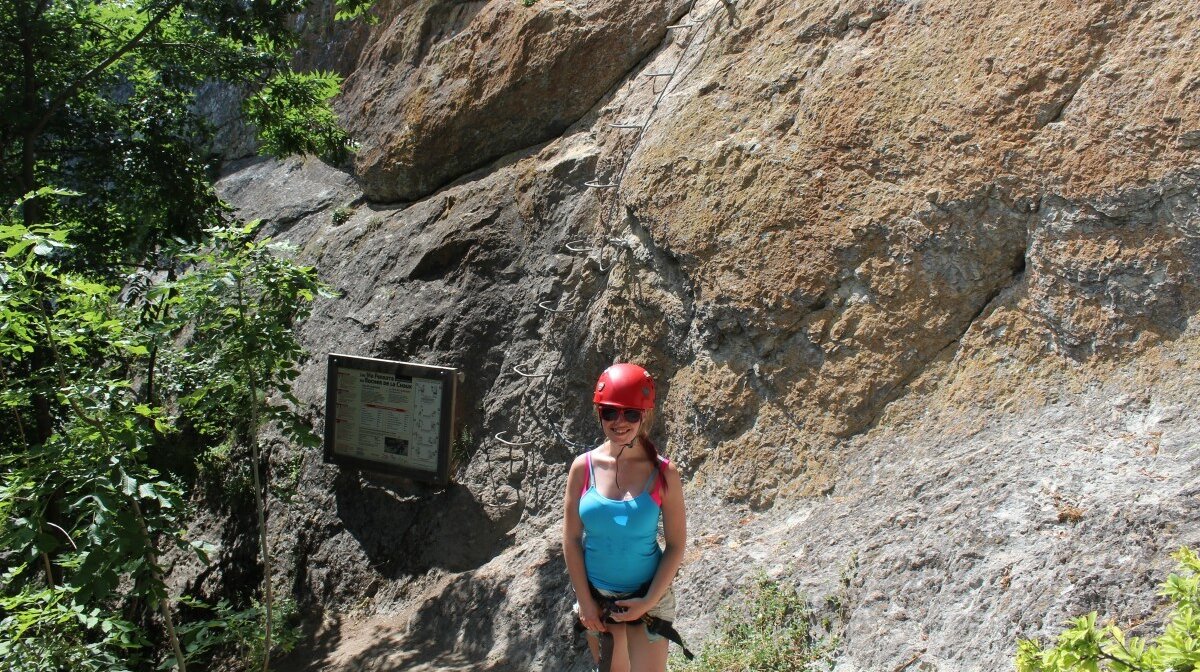 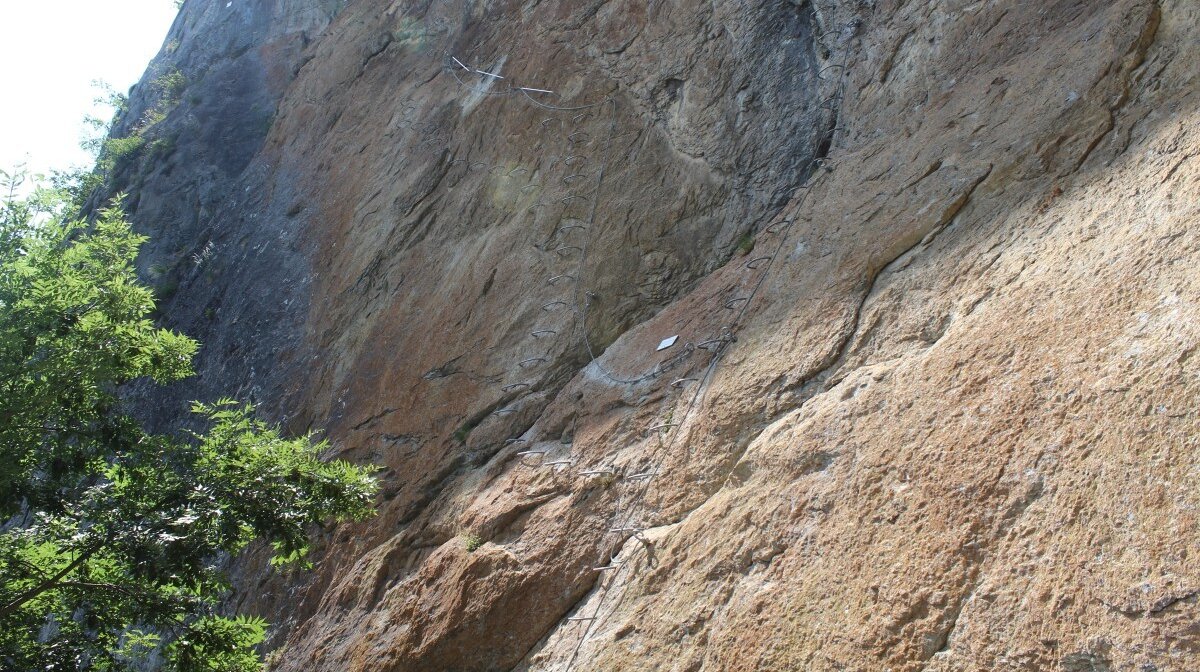 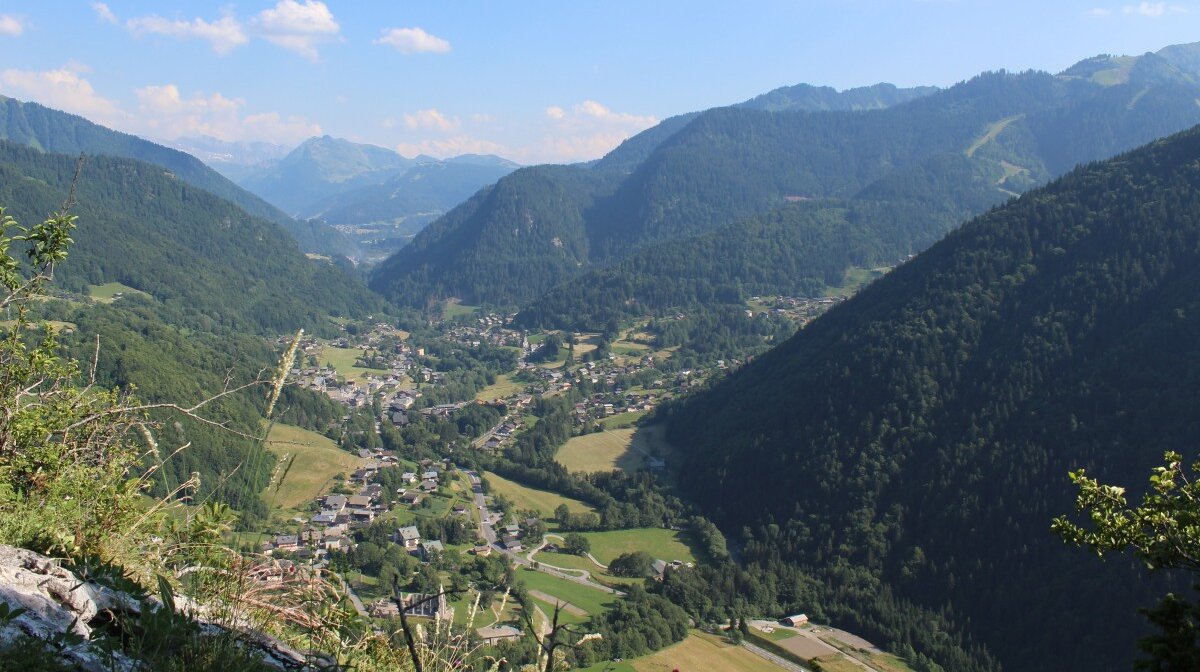 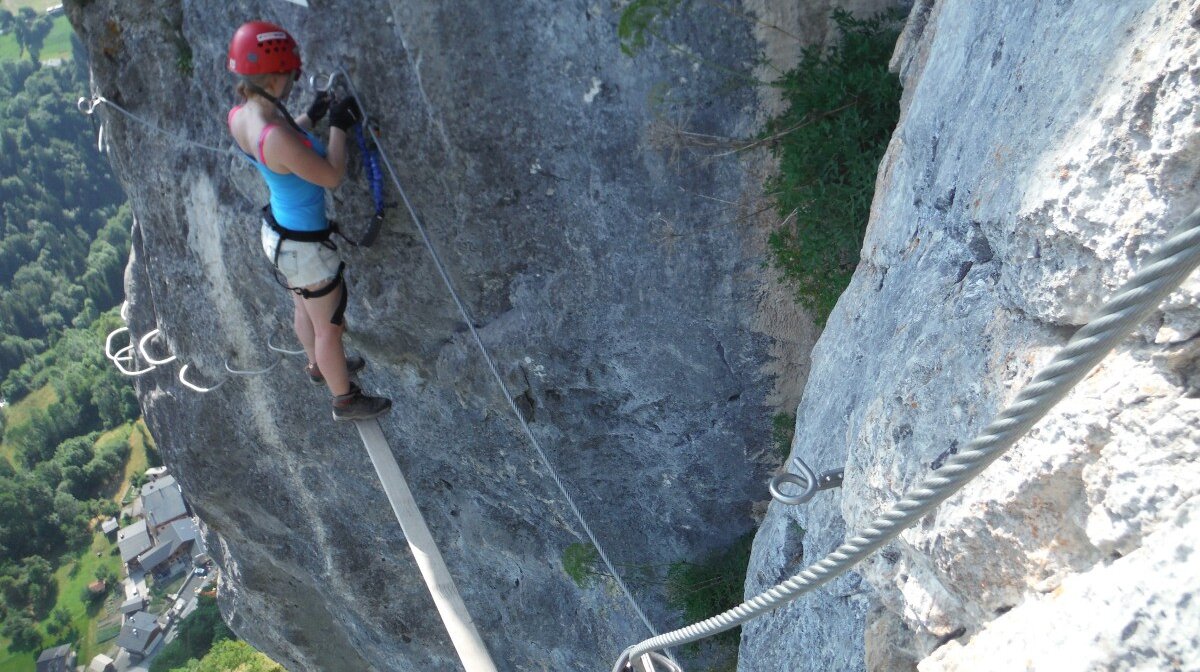 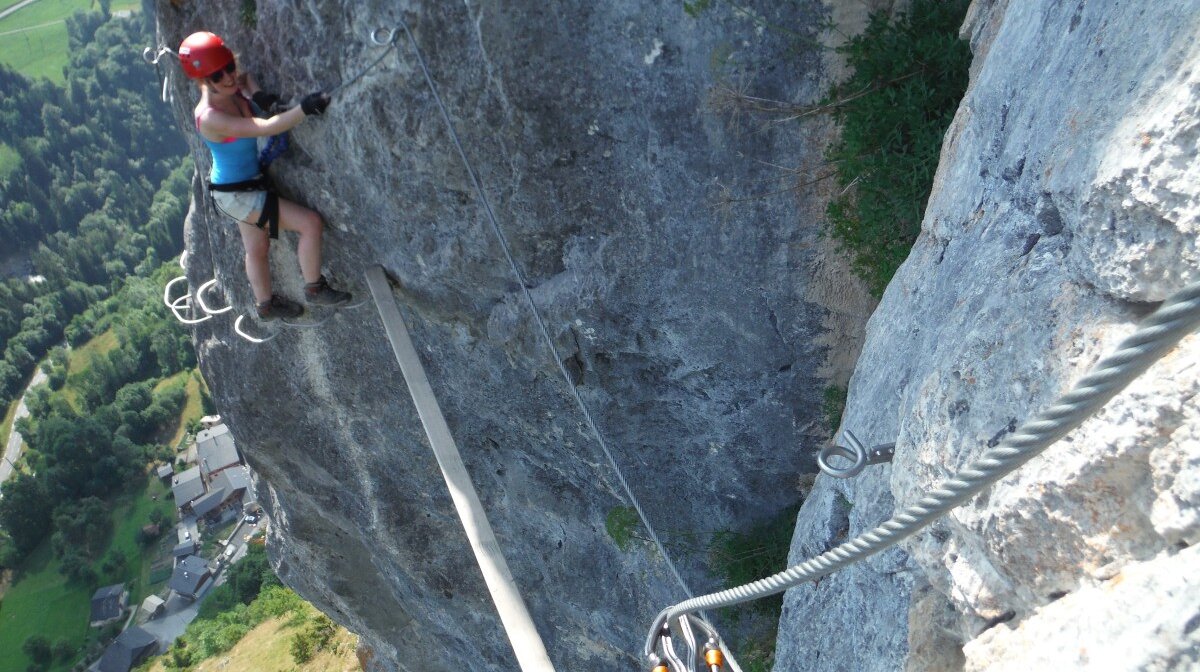 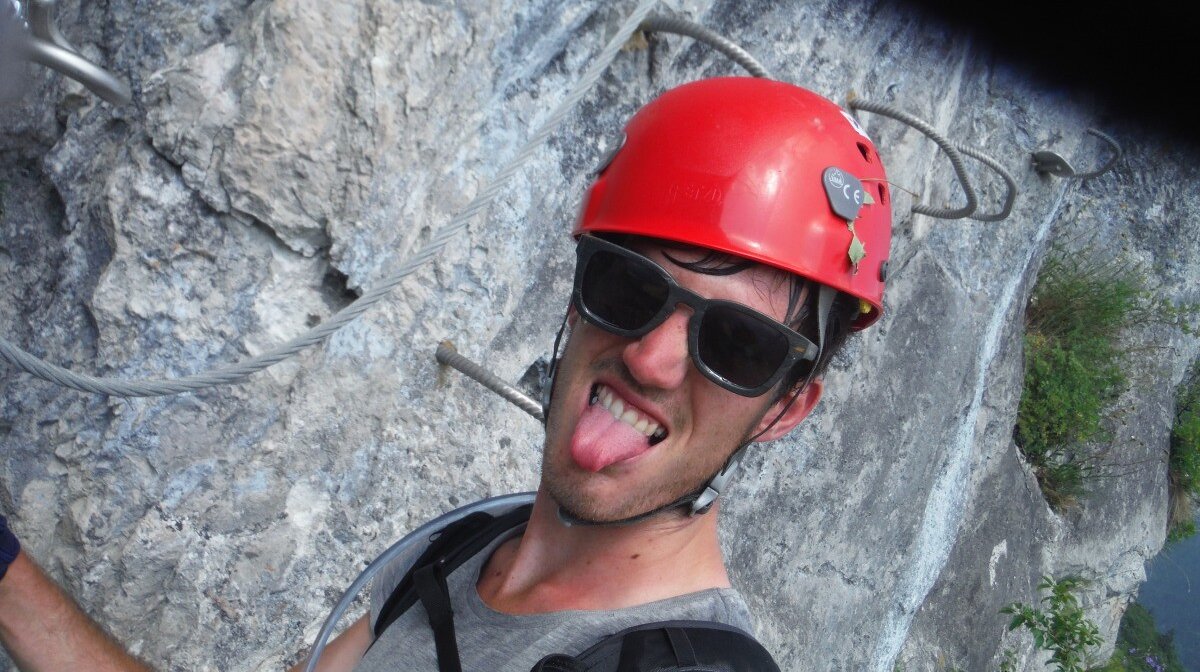 About to start the climb..

Steps and cables snaking up the rock

Great views on the way up

About to step onto the ledge..

Success.. we made it!

Built in the First World War, Via Ferrata (translating to ‘Iron Road’) was once used as a mode of transport for the soldiers at war. Now a hundred years later, it is a free activity for hiking and climbing enthusiasts who are willing to brave the cliff for the beautiful views that it provides. Each step taking you up the small metal rungs which cling to the rock face.

Once we got to the car park in St Jean, the journey began with a 20 minute steep hike following the trail through the forest to reach the cliffs edge. With the climb itself then taking an average of around an hour and a half non-stop to complete, followed by a 30 minute even steeper hike back down, it was definitely a good work out!

I stood there in the 30 degree heat in my harness and helmet, looking up at the 200 metres of vertical rock that I was about to climb. It is imperative for any climb to ensure that you have all of the correct equipment, so my climbing partner and I had rented ours for a half day from Intersport in Morzine for just 10 euros.

“Once you start..” my friend warned, “..there’s no going back.” Slightly nervous, I slipped on my gloves and clipped my harness to the metal cable that followed all the way up to the top. If you were to lose your footing you are attached at all times to the metal cable, so falling to oblivion is not an option. Instead if you were to fall, a thick piece of rope is released from your harness on impact and lets you drop 5 metres, acting as a shock absorber and although it may still hurt, you would be theoretically fine. Except you can only use this option once, after that there is no shock absorber – it just hurts. “What if I fall?” I called up to my climbing partner. “Just don’t fall.” He casually stated, already 5 metres up the cliff and counting.

Already feeling like my fitness levels were being tested from the hike, I stepped on the first metal rung clipping my harness to the highest point of the metal cable that my little arms could reach and began to climb up the steep rocky cliff. At first I worried that the continuous clipping of the two attachments on the harness to the metal cable would be a nuisance, but after a couple of metres you get into the routine of climbing, clipping, unclipping and admiring the view and I began to find it fairly easy. The trick is to always clip your harness to the next highest point of the rope that you can at all time and to check that you are clipped on securely before continuing to climb.

There are 6 levels of difficulty, from easy to extremely difficult. Feeling that that might be a bit much for my first time on the Via Ferrata, we opted for Level D, difficult. And although difficult, the views on the way up, if nothing else made the challenge all the more worthwhile.

As we climbed higher and higher up the vertical cliff we began to wonder who implements the metal rungs and hooks for the metal cable and how do they do it – risking their lives by hanging out an helicopter maybe or did they quite literally just climb the cliff and stabilize mini metal steps as they went along? It was at that point, at just over half way up, we came across the aerial walkway. A single, slim wooden beam that reached around 2 metres across to the other side of the rock, with only the metal cable to hold on to you walk across it. Maybe they made them with the helicopters after all. You would think this the scariest part of the climb, and for those who do not have the best relationship with heights to begin with, perhaps it would be. Yet I personally found it the most thrilling, giving you the best views from such a height – providing you also keep one eye on your feet as well!

With no rest stops available, I began to feel my arms weaken. Mixed with the heat and dehydration, each step up and pulling my body up action began to take its toll. I advise that if you were to complete this climb, then bring water, preferably in a container that you could clip to your clothes/harness so it is easily accessible whilst climbing. “Just 6 more parts, you’re almost there!” my climbing partner called down to me. I looked up and could see the tip of the top edge and climbed as fast, and accurately as I could, not underestimating any step, yet equally in a ferocious bid to reach the top and successfully finish the climb before my arms gave way.

When we reached the top, the amazing view was more than worth the journey to get to it. Adrenalin pumping and bodies aching, we sat down to take it all in. Each fear, shot of nerves and ‘don’t look down’ moment had been forgotten and all that was left was the eureka feeling of completing the climb, mixed with excitement at being ready to do it again – as soon as my arms recovered that is!

At the top of the mountain, with a plastic cup of champagne in hand, my climbing coach and I cheersed to steep cliffs – and the people who set the set the routes on them, those guys deserve a raise!