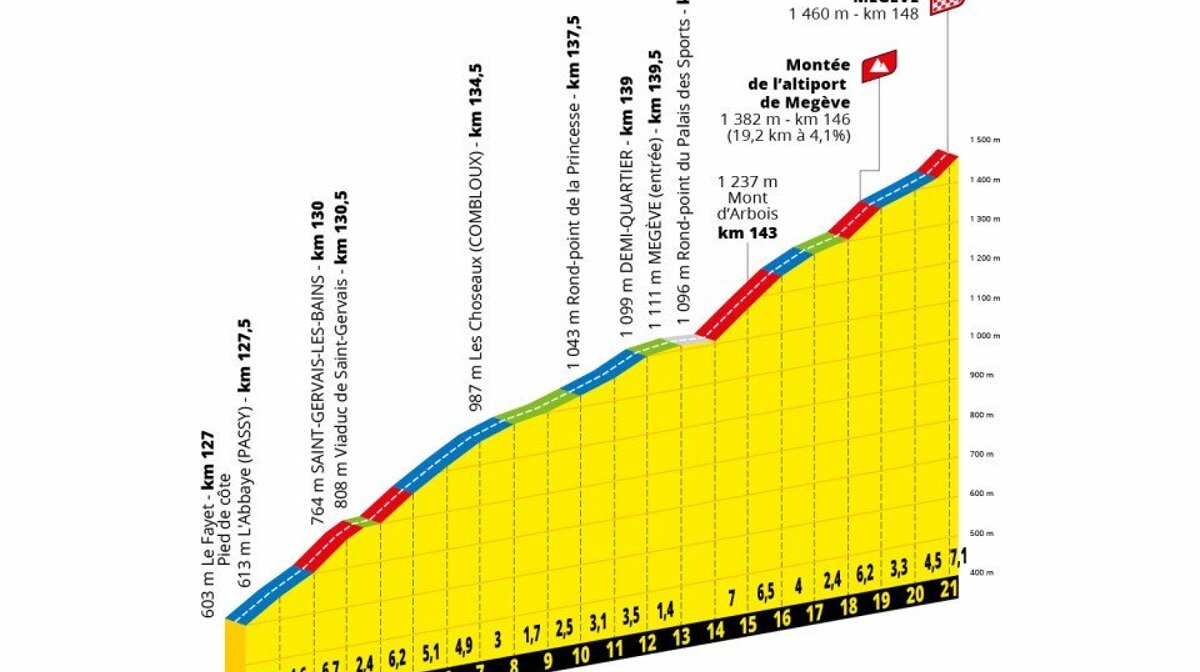 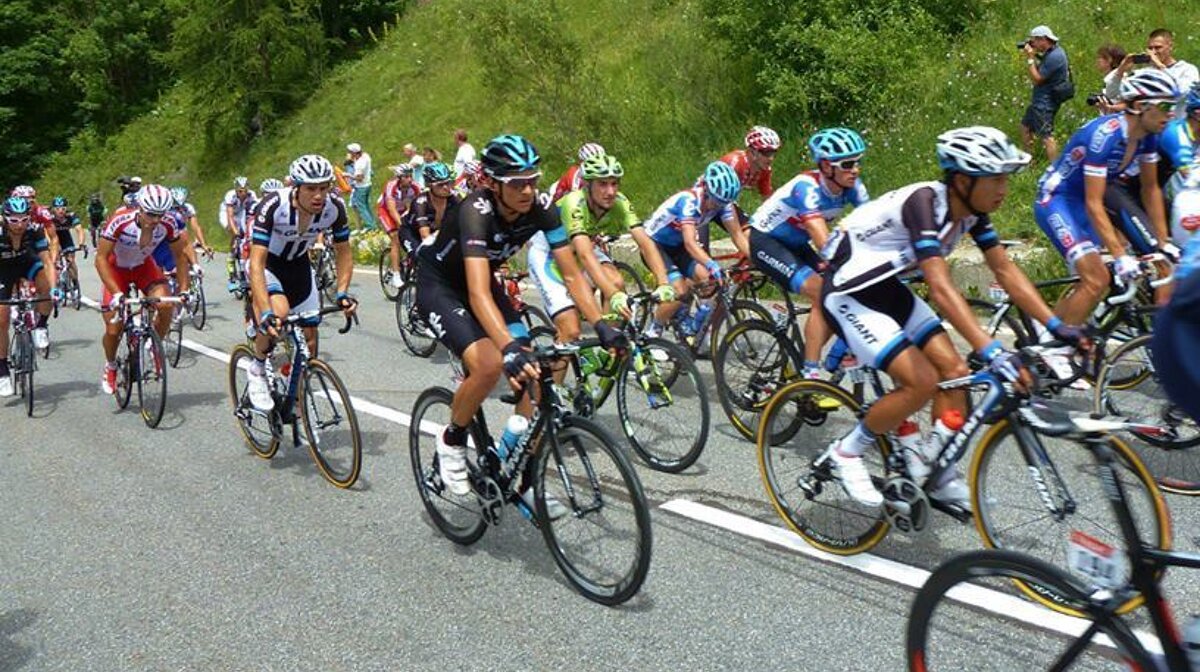 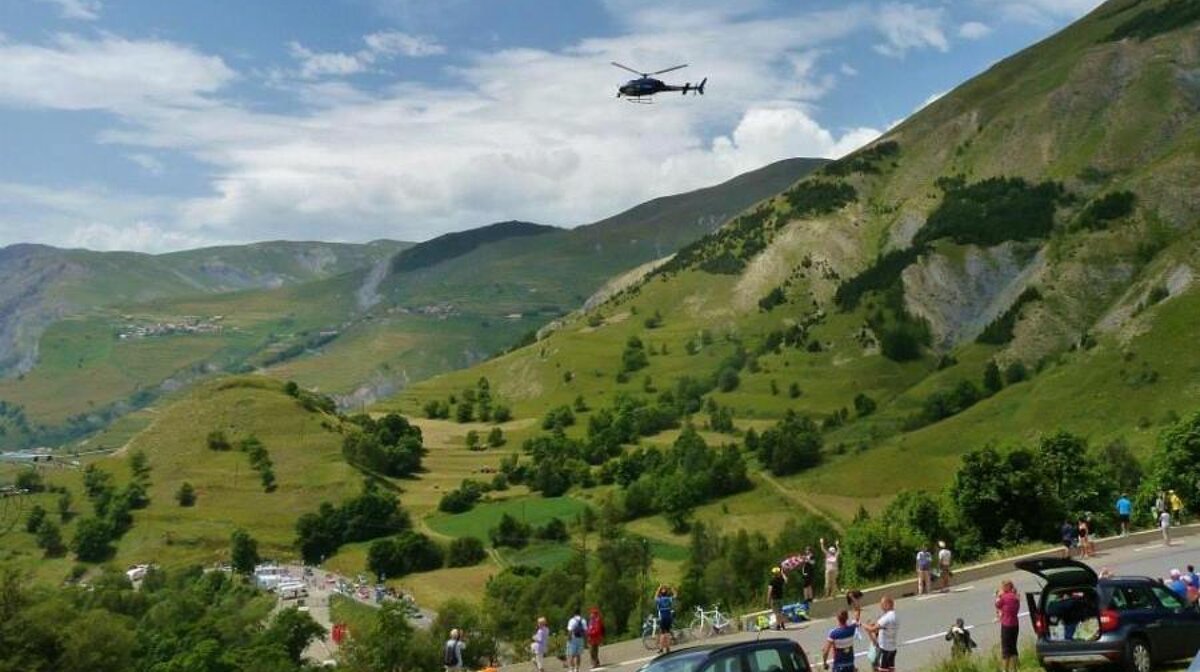 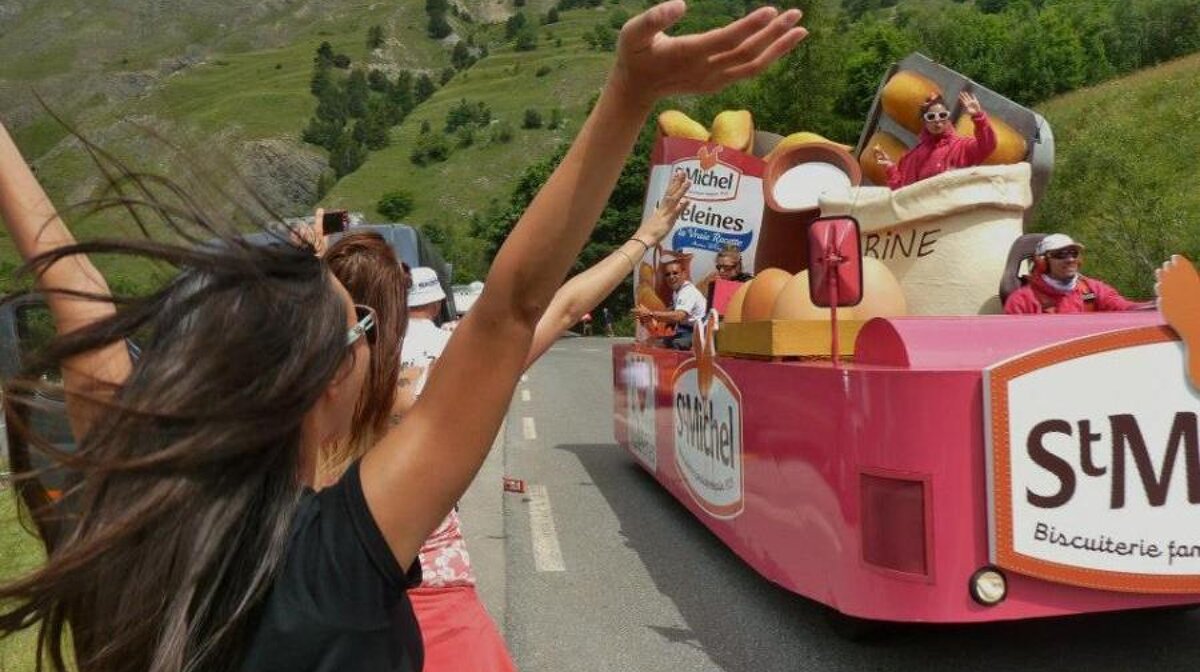 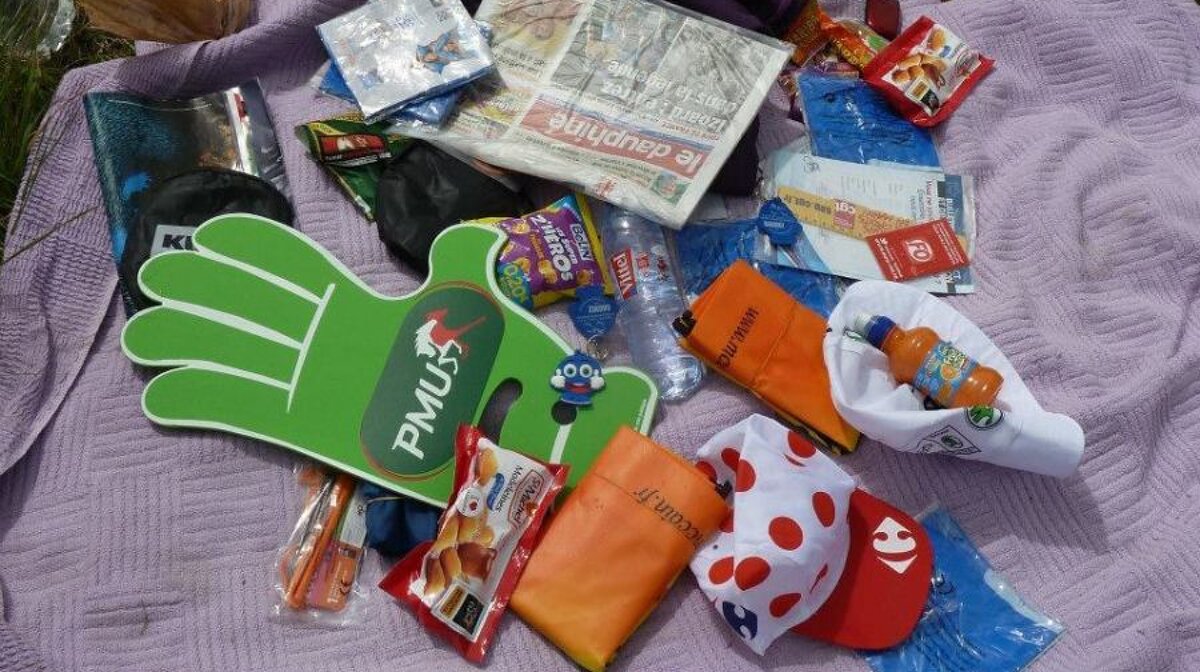 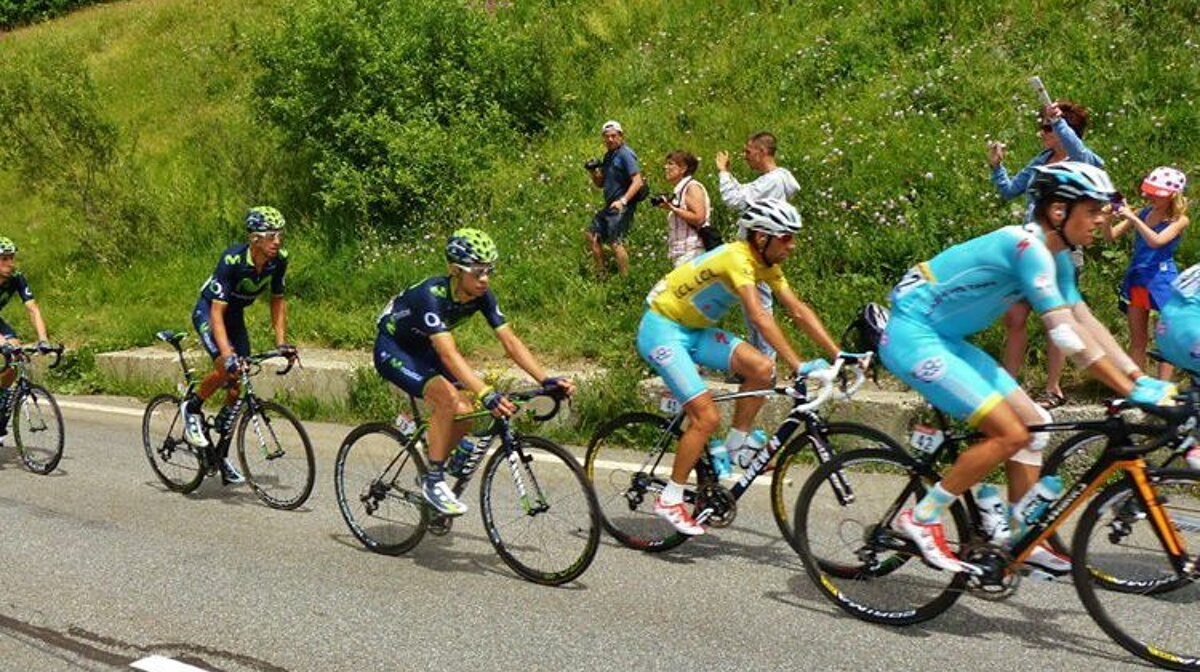 Watching the arrival of the Tour

The 'Caravan' drives past

Freebies from all the sponsors

Every summer France is gripped by the biggest and best cycle race in Europe - Le Tour de France.

The Alps have played a large part in the race over the years with the gruelling mountain climbs providing some of the most exciting spectacles of the event. The route changes slightly each year, taking in different towns, villages and cols along the way.

Even if the race doesn't pass near to where you are this summer you can guarantee that it will still be avidly watched in bars and cafés around the country with everyone joining in to cheer on the famous yellow jersey!

For more information check our introduction about the Tour de France.

This year Rest Day One will be in Morzine, and the following day will see the Stage 10 departure from the town centre, which will finish 148km later in Megéve on a newly created route. Classified as a hilly, rather than a mountain stage in 2022, the gruelling high altitude mountain climbs that Morzine is famous for won't be conquered this year. The riders will transfer from Chatel the evening before and enjoy their rest day in Morzine, where the town will become a theme park of all things cycling as the team trucks and caravan of sponsors set up camp.

The Stage 10 start the next morning will be early and fast, so it will be all about being there when they set off, then finding a bar with a TV and/or good wifi and watching the riders as they make their way to Megéve. The stage from Morzine to Megéve will feature breath taking scenery, at one point running alongside Lake Geneva, winding through valleys culminating in the battle between the race's strong men to the finish line at the altiport.

The town will be buzzing with excitement, with visitors from across the globe. There will be numerous road closures in place, so it's not going to be easy navigating your way around, and all our usual advice about where to watch the riders (when Morzine is the finish stage) is out the window this year... hence why we suggest finding a bar!

So, usually when Morzine is a finish stage, we'd say look for an uphill section of the course where they are climbing and won't whizz past before you've really seen them. For next time, here's our tips on how to catch a glimpse of the riders:

Hiking
Joux Plane is the most gruelling ascent of the day with an 11km climb at an average of 9%. You can walk to the top from Morzine via the Nyon plateau and continue on up. Usually you can find a spot in the last km, but be aware it's a big walk and fairly steep and you can expect to be climbing for around three hours before reaching the summit. The caravan usually hits the peak around 15:00, and the first riders about an hour and a half later. Similarly, if you don't mind a big walk then the top of the Col de la Ramaz and Praz-de-Lys could be a good option. Riders usually pass Ramaz peak around 15:30.

Lifts
If hiking isn't for you, get a pedestrian lift pass which is how many spectators get a good viewing spot. You can access Ranfoilly bowl by the Chavannes lift from Les Gets, the Pleney lift from Morzine (one hour walk) and the Charniaz lift from the Nyon plateau. You would then have a short walk to the second short ascent that comes after the peak of the Joux Plane before the descent into Morzine. Similarly you can get the Nyon lift and walk from the plateau, which would cut around two hours from your hike. You can find your way with a lift map.

Mountain Biking
You could also access the Joux Plane via the lifts on a mountain bike. Why not spend the day exploring Les Gets before you head up the Chavannes lift to enjoy watching the riders come in. The road between Les Gets and Morzine will be open, which gives you the flexibility to park in Les Gets and then return back to Morzine by car, once the roads have reopened - bear in the mind they will still be very busy though.

Road Biking
With road closures it will be pretty difficult to access some of the Tour de France route by bike, but there's no reason you can't go for a ride before accessing parts of the course from alternative points. You could try cycling the Col de l'Encrenaz from Morzine then dropping to the base of the Ramaz to watch the riders descend to Taninges. You could also try cycling towards Mieussy via the Col de Jambaz and Onnion where you should be able to join the edge of the Ramaz climb. You can then race back to Morzine to see if you can arrive back in town before the tour riders, who will then be heading off to battle the Joux Plane.

Driving
When Morzine is a finish on a stage there are a couple of car parks reserved for park&ride in Morzine, which might be a good option if you're hoping to watch the stage finish at the tourist office square. The Prodains and Nyon car parks are run on a first come first served basis but they will be well worth trying. From Nyon it's a beautiful, short, flat walk along the river into town, if you don't fancy hopping on the bus. You'll also come out right at the bottom of the Rue du Bourg, which will be the sprint finish. You could also leave your car a little out of town and ride/walk along the river from Saint Jean d'Aulps or Montriond into Morzine. You'll come out at the Palais des Sports, which is just a few minutes from the centre of town. The first riders are usually expected to arrive at the finish line in Morzine around 16:50.

The Tour first discovered Morzine in 1975, and since then it has had the honour of being a Stage town over 20 times.

The infamous Col de Joux Plane is the most famous of the Morzine Cols and has been known to make or break riders over the years. Climbers shine here, categorised as "Hors Categorie" (ie. Beyond Category) by the UCI, it is one of the toughest challenges the riders take on. The climb from Samöens to the summit is 11.6km, with an average gradient of 8.5%, (12.5% in the steepest part), with an overall altitude gain of 998m.

The 2022 route will see the riders will start out from Morzine with a gradual descent towards Lake Geneva, then wind their way through the hills alongside the Dranse d'Abondance river before their first real climb. They'll cycle through Thonon before a steady climb towards Vailly, followed by a descent to Tanninges, and from there the riders head through Cluses and Sallanches before the gruelling climb up towards Saint-Gervais-les-Bains. They will then continue to wind their way through the surrounding ski resorts up to Megève, before the final challenge of 7.7km climbing to the Altiport at an average gradient of 4.4%.

Dates for this event